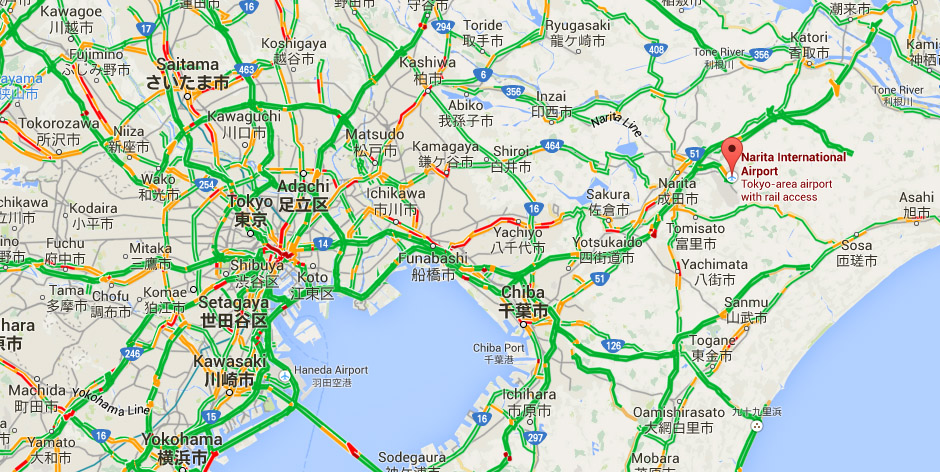 Please print this page in case of problems!

Ok guys, once you arrive at the Tokyo Airport, you’ll most likely be in Narrita Airport. It’s the bigger airport, the international one. But sometimes flights fly into Haneda so please check!

Narita is far out of the city. Will take about 2hr to get to Maki’s house. Cost is roughly $30 or 3000yen to maki’s station called “Magome”.

There’s one or two train changes along the way depending…
1. The first is at a station called “Aoto”. It’s very easy… simply walk straight across to the other platform… platform 2. Photo’s below.
2. From Aoto some of the trains go directly to Magome but many don’t. If they don’r you’ll also need to change at Sengakuji. Again it’s any easy change of lines.

The train from Aoto platform 2 will leave to go directly to Maki’s station which is called “Magome”. It’s the second last stop and not very far (you’ve almost made it!). Don’t go to “Nishi Magome” that’s “West Magome”. You are going to “Magome” station.

Then you to walk to Maki’s house. It’s about 10 mins and goes up a small hill, so I hope your lugage can be wheeled or carried! Photo directions below.

Remember many ATMs won’t let you take money out!

You want to buy a Suica Card and put at least $50 on it or 5000 yen. Get Yen out from the ATMs at the Airport, or 7/11 stores always have an ATM you can use. There are also 7/11 stores in the airport, they are everywhere. The Suica card lets you travel on any public transport including to Maki’s house.

To buy the Suica card see the instructions near the top of our main info page. Also info is there regarding the ATMs too.
http://www.create3dcharacters.com/inovado/japan-maki-and-andrews-wedding/

To contact Maki in Japan you must have the Line application on your phone AND a pocket wifi device. Line is the Japanese equivalent to Viber (I like it better). Everybody uses Line instead of phones in Japan.

It’ll be much easier if you have internet in Japan but you have to buy it! You can get the net through a pocket wifi which is like another phone that acts as a modem, be sure to organise one before you leave! Usually you can pick them up from the airport. If you have wifi from the airport you can contact Maki on the “Line application” and if she’s home she’ll be able to meet you at Magome Station. She can help you with your bags and the last stage of your journey.

PHOTO DIRECTIONS FROM THE NARITA AIRPORT TO MAGOME STATION

Ok at the Airport get some money out from an ATM and pickup your pocket wifi.

Remember you can ask lots of questions at the airport, almost all staff will speak a bit of English and are very helpful.

Next go to the trains which are in a lower level and are easy to find. See signs like this… 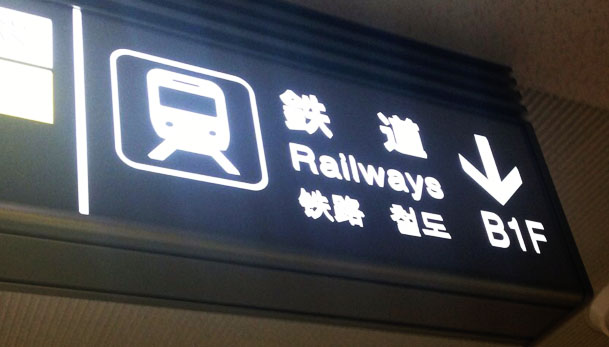 Once at the train level you can get tickets from this booth and ask questions… but it’s better if you can grab a suica card and put at least 5000 yen on it ($50). You can get Suica cards easily from the machines, they have English. See the main information page for instructions
http://www.create3dcharacters.com/inovado/japan-maki-and-andrews-wedding/

In the picture below you can see the machines on the other side of the ticket booth. Look for “Suica” and press English. 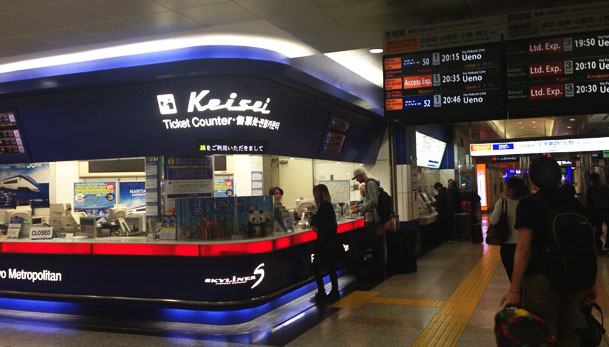 Now you want to follow these signs and swipe your Suica Card on the gate. It’ll beep and let you through. 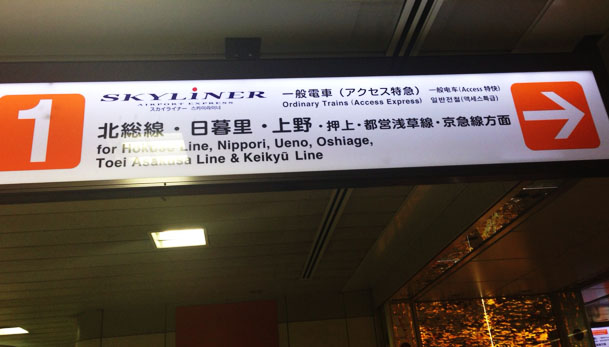 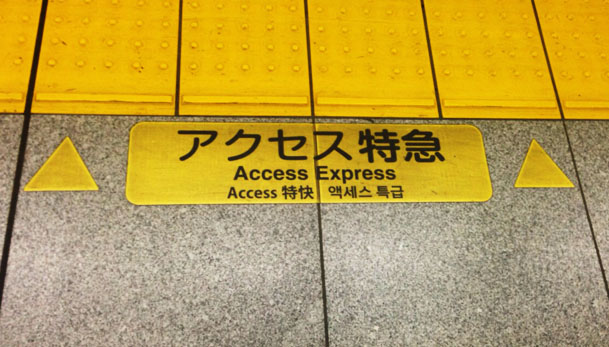 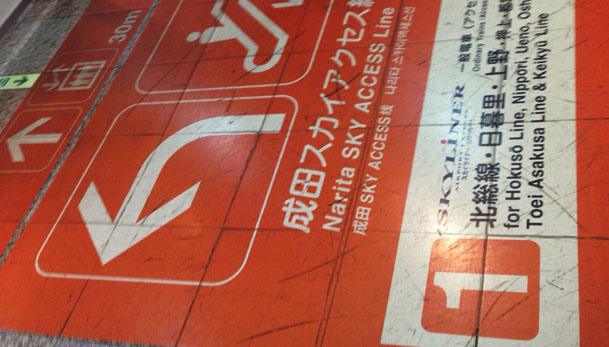 Here’s the timetable, you want to catch the trains in orange as they’re the express trains! 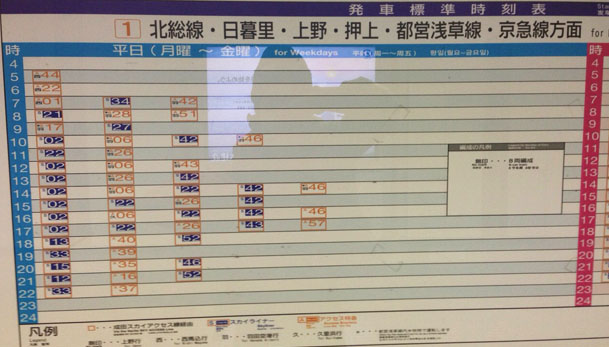 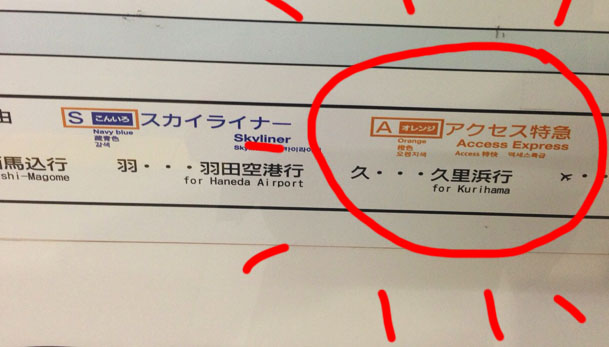 Once on the train you’ll probably be on an express train so you’ll be skipping a lot of stations and the onboard maps will be a bit confusing.

There’s lots of English though and once you get to the city you’ll start stopping at every station, keep an eye out for “Aoto” but it will take a while. You want to get off there. 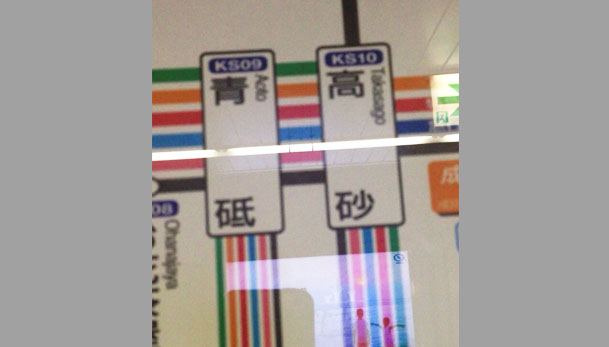 Once at Aoto Station you need to leave from Line 1. Most probably it’s the same line as you jumped off, you need to make sure the train goes to Sengakuji or Magome.

Some trains go all the way to Magome but most don’t. If they don’t you need to change at Sengakuji. 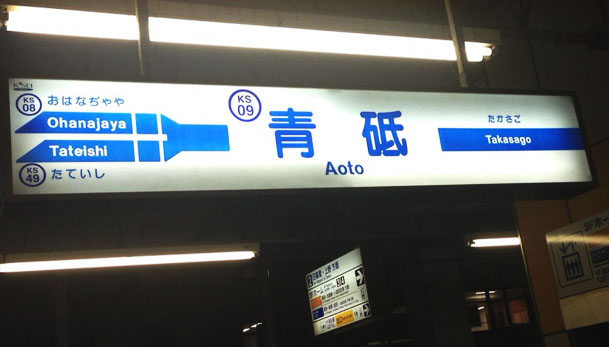 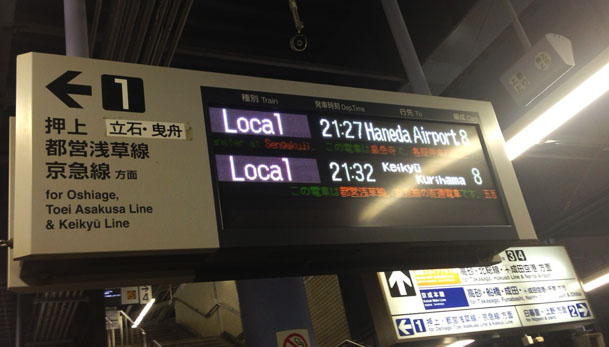 If your train doesn’t go to Magome, switch trains at Sengakuji. At Sengakuji it’s most probably the same platform but opposite line. The train to Magome leaves from Line 2. 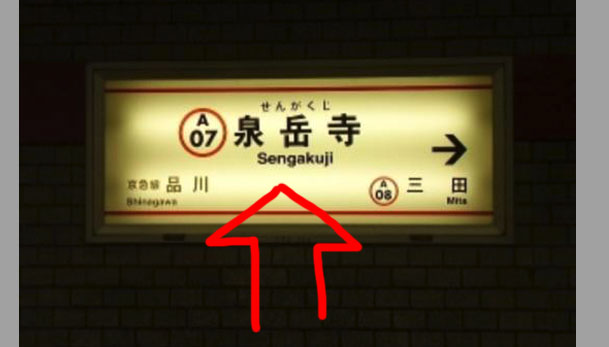 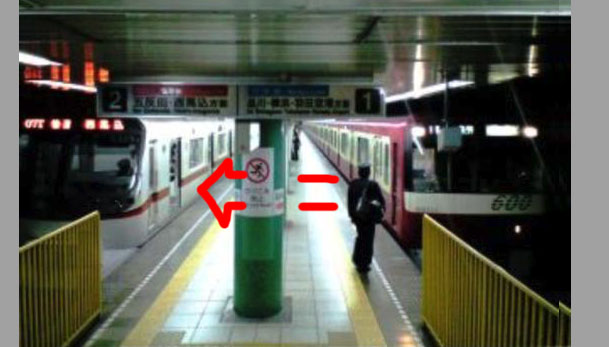 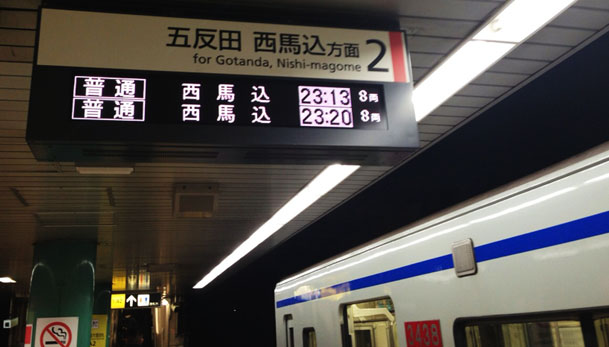 Jump out at Magome Station. This is Maki’s stop.

The Magome Station escalators on the far left. 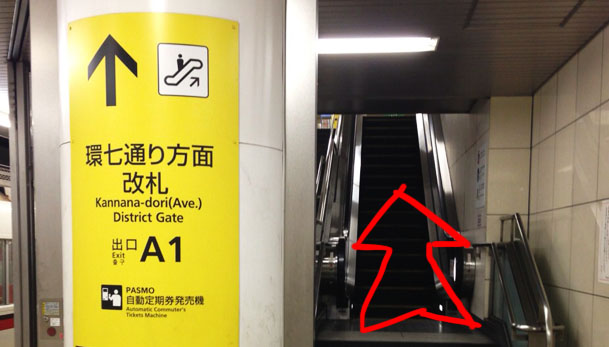 But instead walk up the stairs! 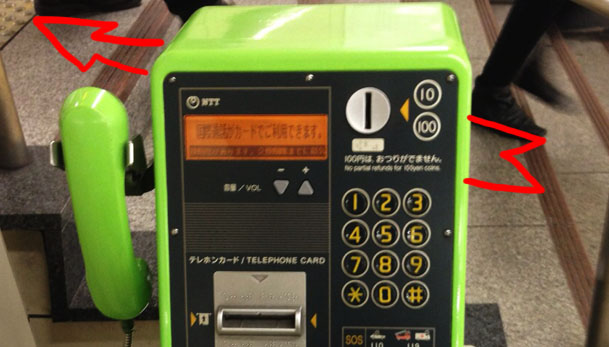 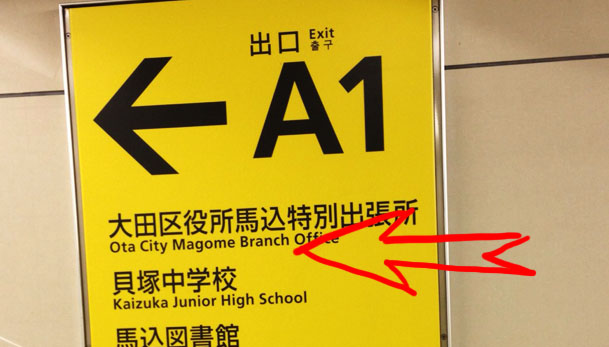 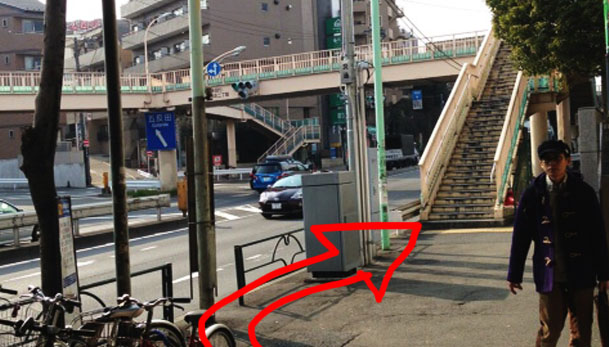 Just past the Lawson Convinience store 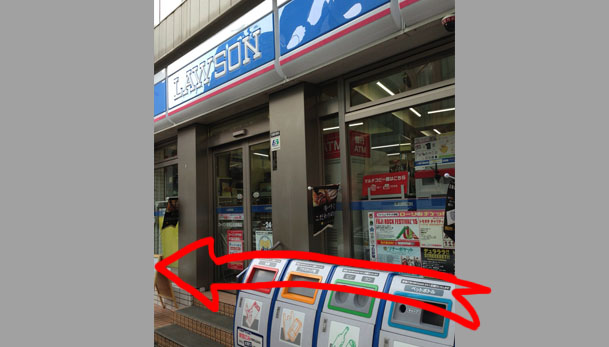 You’ll see a crossing on the left, go over it! 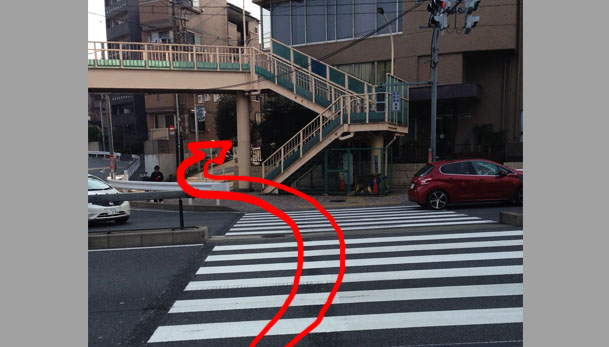 Stay left and up the hill 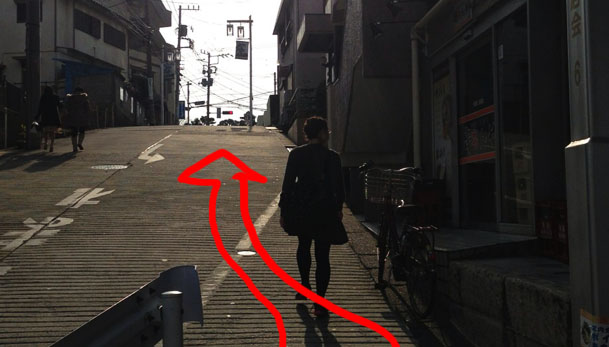 Turn left at the very top of the hill 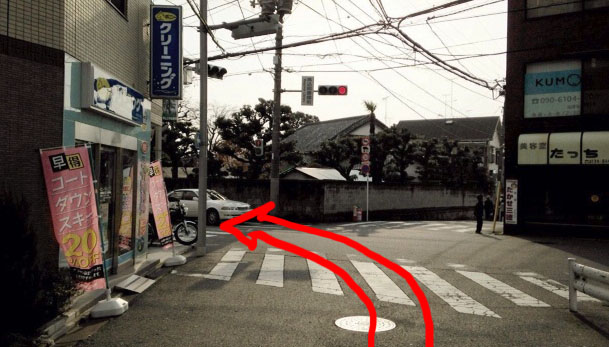 Then first right down, this is Maki’s street 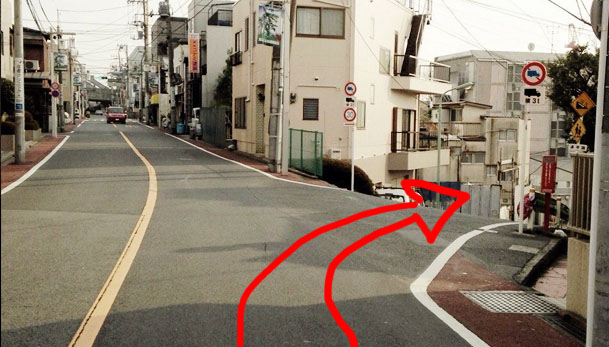 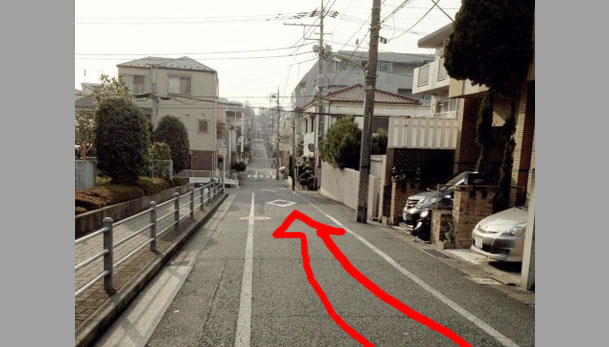 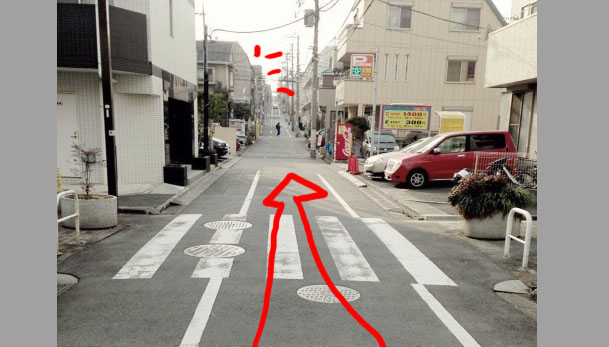 Until you find Maki’s house! Press the buzzer, congrats you’ve made it! 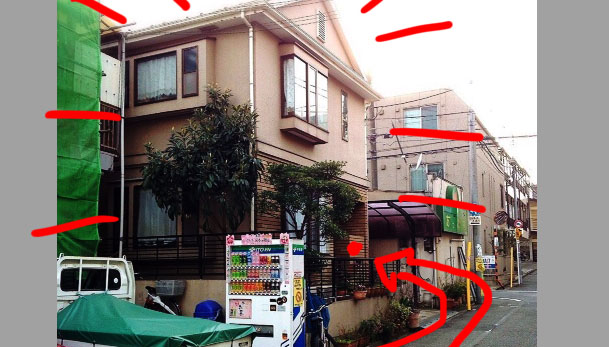