In This Class You’ll Access…
This page will show you how to build animation control-curves for your rigs which are handy for extra appendages like hair and cloth.

This page focuses purely on FK controls which is just a simple hierarchy of objects. FK is the most common rigging type and easy to understand, it’s also very common and loved by animators. We are assuming that you have a good understanding of basic parent hierarchies in Maya.

You’ll learn how to build the FK controls manually and with the Control Creator (CCtrl) button which we’ve included in the C3dC Prefs on the C3dC Rig Shelf.

Controls in Maya are usually just NURBS curves that help you select the objects that you’re animating. You could select the joints by directly clicking on them without the need for the curves. But the extra curve controls are intuitive to pick, easy to show and hide, and you can zero them at the default pose. They are the most popular way for animators to interact with rigs in Maya.

In this lesson, you’ll also learn about some great Maya foundations like the differences between “transforms” and “shape nodes” and other foundational rigging ideas.

Although the setup can be built instantly at the click of a button, it’s important that you understand how to create the controls manually. You’ll learn about many foundational Maya tips here, even if you aren’t interested in becoming a rigger, it’s worth understanding the following concepts.

See the page “Joints And Orientation In Maya” before learning this page as it requires a knowledge of joint orientation. 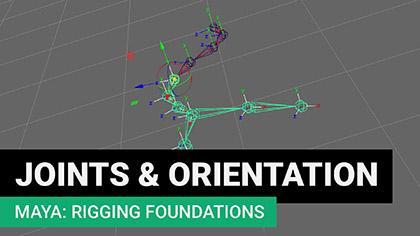 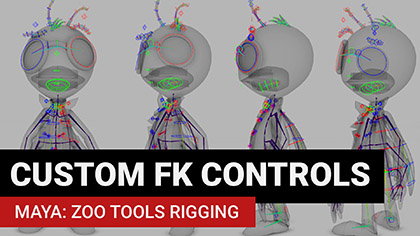