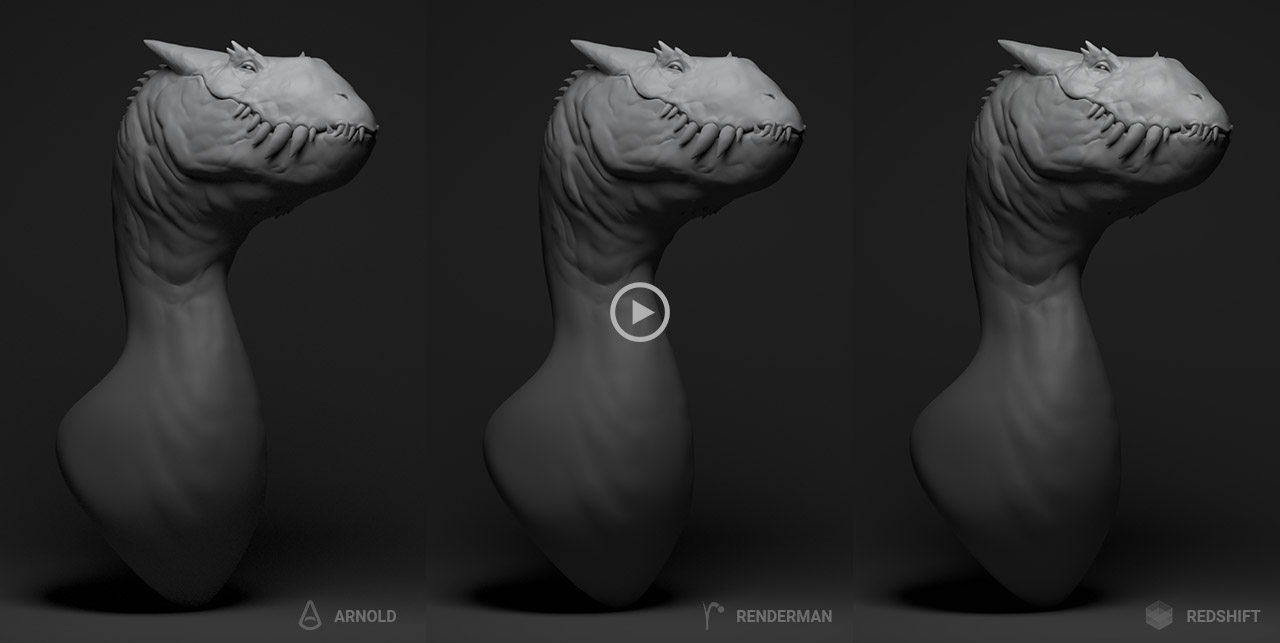 Welcome to this page covering quickstart guides to three renderers…

*Big thanks to Ville Sinkkonen for letting us use his killer 2d design of his Pleased Dragon artwork. The 3d sculpt is by instructor Andrew Silke.

In Arnold, Renderman, and Redshift, you’ll learn how to…

(Scroll down to here for the video tutorials)

Create 3d Characters supports Arnold, Renderman and Redshift, and we make use of our Lighting and Shader Managers which is part of our tools called “Zoo Tools Pro”. Zoo Tools Pro comes free with any site purchase . The lighting and shader tools will help you to learn all three renderers under the same easy to use UI. But they are not mandatory. This page will still be helpful if you do not use Zoo Tools Pro.

Our scripted generic shader/light file format supports Arnold, RenderMan and Redshift. You can also convert between these renderers too with some limitations.

If you’d like to use Zoo Tools Pro, purchase our “Site Subscription”, then immediately cancel it for only $10, you’ll still have access for the whole month, and you can keep Zoo Tools Pro v1 forever! You can also download all our rigs and check out all tutorials too.

The renderers here are usually considered “Offline Renderers” and produce superior rendering results, but they are not intended for games or very-fast real-time viewport navigation.

These renderers are “raytracing”, engines not “rasterisation”. Reserisation is used in games and for the viewports such as Maya’s “Viewport 2.0”. Raytracing speeds have gained over the last few years, and we are starting to interact with them in real time, even so, it’s important not to confuse this with games or the faster Maya viewport “Viewport 2.0”. All renderers will be moving into the viewport soon, but they are still not considered genuinely real-time.

These renderers are PBR or Physically Based Renderers; which means that their focus is on producing realistic images, though they also use some NPR features (non-photoreal/cell shading) as well.

The various raytracing renderers produce relatively similar results, and even we as professionals have a hard time picking which renderer was used to create an image. It is straightforward to switch renderers once you’ve learned one because they all borrow from the same core concepts.

Since most renderers produce images that are similar in quality, the choice of renderer can often come down to speed and cost, especially for students, individuals and small teams. Their features also play an important role, but rendering features are generally more important in large teams and the bigger studios.

For speed considerations, it’s important to understand what GPU and CPU rendering is.

GPU rendering is not different or lesser than CPU rendering, math is math, and the results can be identical. At this stage, Redshift is the only GPU renderer we teach, and you can only use it with the newer NVidia video cards, it does not come with a free version without a watermark.

So your hardware limitations and budget will play a role in deciding your renderer.

For simplicity, you can think of a Geforce 1070 video card in Redshift as being roughly three times faster than a dedicated CPU in Arnold or RenderMan, but this will vary greatly depending on the task.

There are technical limitations of GPU rendering, for example, the maximum measure of video-RAM (VRAM) on each video card can be a bottleneck for very large scenes. But with the newer Geforce 1070 and above cards there is at least 8BG of ram on each card, so this limit is less of a problem than it used to be.

It’s challenging to compare the speed of renderers accurately, but here are our very rough estimates, these results will vary heavily on the scene and the renderer, the estimates are based off a standard image rendered in Arnold or RenderMan where a frame takes ten minutes.

The first results are Redshift rendering on a single Nvidia Geforce 1070 when compared to Arnold or Renderman on a 16 thread (8 core) 4ghz CPU.

Both Arnold and RenderMan have also invested heavily in GPU rendering too, so it is only a matter of time before they also become GPU compatible.

Arnold 5 is free and comes with Maya. There is no extra setup, and it’s a quality great CPU renderer and is used in many films commercials and TV shows. The free version has no batch rendering, so you can only render on one machine, and you must have Maya open and render with the “Render Sequence” functionality.

Arnold is still a CPU renderer and does not use GPU (video cards), Autodesk has let us know they are working hard to make the renderer GPU compatible possibly in Arnold 6.

Renderman 21 comes with a free PLE (Personal Learning Edition). It is Pixar’s renderer and is also heavily used on VFX films too, it is a CPU renderer at this time. You can render RenderMan’s free version on five machines, and it comes with a handy Render Manager that allows you to submit multiple rendering jobs. At the time of writing this, Pixar has released RenderMan 22, but it will be a few months before it’s available for non-commercial use.

RenderMan is still a CPU renderer and does not use GPU (video cards), Pixar has let us know they are working hard to make the renderer GPU compatible, most likely in RenderMan 23. Renderman 22 has already been released for anyone who buys it.

If you have newer NVidia Video cards in your machine, Redshift 2 is a very fast renderer and is our main Renderer here at Create 3d Characters. The quality of this renderer is on a par with Arnold and RenderMan. Redshift 2 can be used for free but comes with an annoying watermark if you do not pay for it. It is a much faster renderer than Arnold 5 or RenderMan 21 so long as your video card supports it’s GPU options, that may change in the future as the other renderers also introduce their GPU features.

Redshift is becoming popular in the industry, and many studios use it in commercials TV series and feature films.

There are many more renderers on the market, and it can be difficult to choose between them. A constantly changing landscape also means that predicting a dominant renderer is virtually impossible.

* VRay is a notable renderer missing from this page. We are currently not supporting VRay due to time limitations and that there is no personal free version. VRay is a great renderer, and we’d like to support it in the future.

Here are some other renderers available. 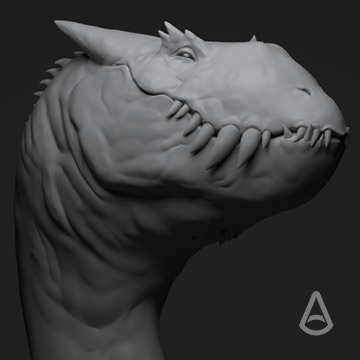 This section will get you started in the Arnold Renderer which has been included in Maya since version 2017. Arnold is an excellent renderer used in many VFX movies, games cutscenes and commercials.

This tutorial supports Arnold 5 which comes with Maya 2018. If you are using Maya 2017, you can upgrade Arnold for free, but you must do this manually.

You’ll learn how to… 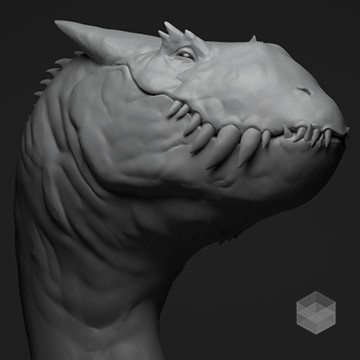 This section will get you started in the Redshift Renderer .

Redshift is fast GPU renderer and it can be tested for free with a watermark. Redshift has been adopted by the industry and is now used in many commercials and films. It requires modern NVidia Video cards to run.

In this section you’ll learn how to… 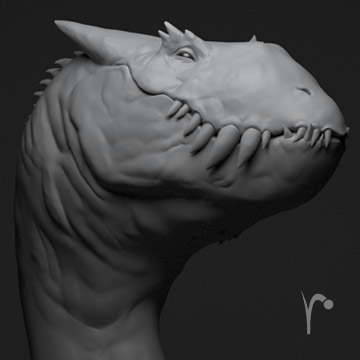 This section will get you started in the RenderMan Renderer . This tutorial features Renderman 21. Renderman 22 is out, but it’s not available for non-commercial use yet.

RenderMan is Pixar’s renderer and is also used to render many VFX movies. You can use Renderman for free with a non-commercial license here , there is no watermark for RenderMan, so it’s easy to learn with the free version.

In this section, you’ll learn how to… 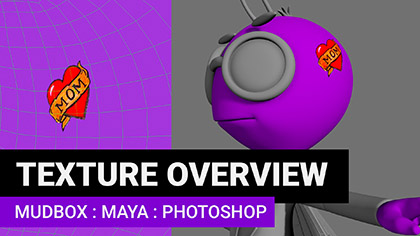 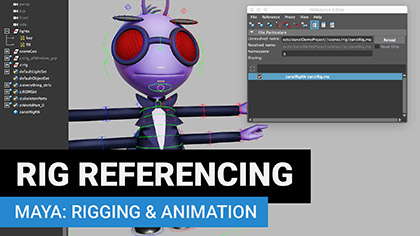 22. Rig Ref Animation →
Next Up In… Generalist Advanced 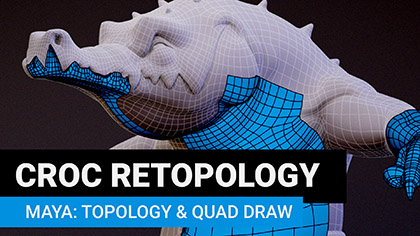 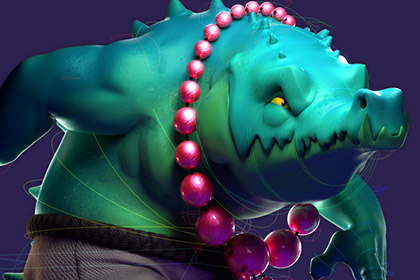 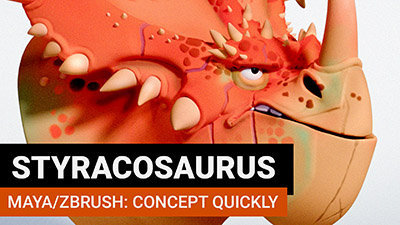